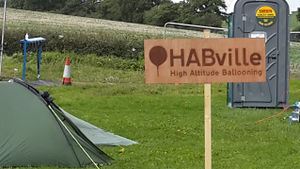 We are HAB (mostly members of UKHAS).

Join us on our IRC Channel at #habville on freenode

To add your name to the attendee list, add 'HABville' to the Village field of your user page.

We will be planning one or more demonstration launches during the weekend, showing the custom radio trackers and DIY balloons developed by members of the UKHAS community. This has been accepted as an official EMFcamp talk, however scheduling is going to be down to the weather!

We have applied for Launch Permission from the CAA for the launch of one or more large balloons. If this isn't successful then we'll launch something smaller under the pico balloon exemption (under 2m in diameter at all times in flight).

UKHASnet is a simple wireless (868MHz) sensor mesh network that many of us have been developing and experimenting with. We've made some UKHASnet 'shields' for the EMF2016 badge to play around with, and will have a UKHASnet network gateway covering much of the site.

We did a HAB Talk and successful pico launch from EMF2012.

Adam Greig gave a HAB Talk at the start of EMF2014, followed by a successful pico launch later in the weekend (several of the trackers were soldered up on site).