The TiLDA MKe project, Code name "ElectroMagnetic Boogaloo", is being headed by 'RepRap' Matt and Bob 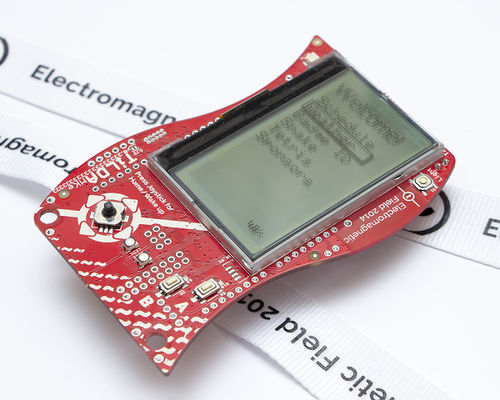 The main aim of the 2014 badge is to give camp attendees live schedule updates and notifications. As with the original TiLDA we wanted to keep with an Arduino compatible platform that will allow badge hacking during and after the camp. As with the previous badge all code and design files are available.

Always make sure you plug your battery in the right way round! If you don't, the charge controller will let out its magic smoke and die / become damaged and die later. The badge itself will still work, but it wont have the ability to charge anymore.

We think this is the cause of the charge controller issues a small number of badges had at the event was due to this mistake being made during final assembly on-site.

Lithium Batteries are dangerous! While these batteries are better protected than the MK1 batteries, they are still scary. Do not short your battery, and if it starts bulging or gets punctured, DO NOT USE IT AGAIN and dispose of it properly.

Please note that there's a known issue with the badge freezing. We're trying to work out what's causing this, but in the meantime pressing "reset" should get the badge back to life. Help with debugging is highly welcome!

How to get going

How to use the badge with pure Arduino code

If you prefer you can always start from scratch without FreeRTOS or any of our code, just keep in mind that you won’t be able to receive messages via radio or use any of the API features we already added. Just start a new sketch in the Arduino IDE for that and get going. If you want to load the main firmware again just change the sketch to “EMF2014” and upload again.

The radio infrastructure is distributed between DKs. Every “gateway” has a Raspberry Pi with two Ciseco USB radios. We never had the chance to actually try it with a large number of badges in the same spot, so please don’t expect it to work perfectly.

Right now, you can call the GLCD functions directly with GLCD.DrawBitmap() for example. This is going to change to be accessed through the GUITask class in the near future, to ensure only one task at a time writes to the screen. Expect this to be simply GUITask in place of GLCD, along with a registering a redraw call back to GUITask.

There's a piezo on the board, but we haven't added code for it to the current firmware. Pull requests are very welcome!

To use our board definition you will need to first get the Arduino 1.5.7 IDE from here
Next you can download the TiLDA MKe Firmware project from either the github repo or via direct download
Now copy the "hardware" folder to your Sketchbook folder, this is usually ~/Sketchbook/
or
Alternative option is to set the Arduino 1.5.7 sketchbook folder to the Mk2-Firmware directory.


Start the Arduino IDE and your will be able to select TiLDA MKe v0.333 for the Tools->Board menu