SiNE: Investigating the Neighbourhood of EMW
Each attended to Electromagnetic Wave receives a SiNE badge which has two purposes; firstly it allows you to take part in a treasure hunt based around the boat. By solving the clues you will be directed to an object or location either on or near the Stubnitz. The clue letter is also the first letter of the answer - when you arrive at the correct location you will find a large matching letter. Hold your badge in front of the letter, and the corresponding light on your badge will illuminate. The first person to solve all the clues and bring their fully illuminated badge to the ticket desk wins two tickets to Electromagnetic Field 2014. Anyone else solving the puzzle will be allowed to choose from a selection of prizes for as long as they last! 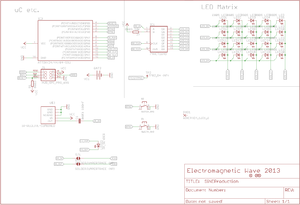